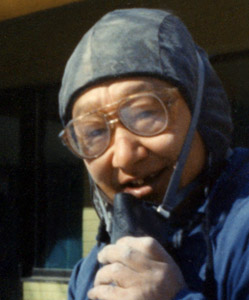 Carving takes all kinds of knowledge, knowledge of the land so that you can find your way to the quarry site, and when you get there, knowledge of the site so that you will know where to dig in the snow. And, of course, it takes knowledge to get the stone out of the ground. It also takes money to buy quarrying tools and gas and grub to get there. . . . These are the things that have to happen before you can even think of making art in Nunavik”

“I took a piece of soapstone and started to file on it while my brother [Nutaraaluk] was carving. I kept on filing my stone and decided I would make a bird’s head. . . . My carving was about one inch high and looked like a raven’s head. I had not intended it to be that, but that is the way it turned out. That raven’s head opened the door to soapstone carving for me” (Iyaituk 1998:69). He sold his first carving when he was 14 years old, but only became a full time carver in 1984, when he received a Canada Council of the Arts grant and was able to resign from the community’s police force.

“Sometimes I get an idea first of what I want to make and I shape the stone into what I have in mind. But sometimes I start chipping and the idea comes. . . . Sometimes I leave carving for a few months or days. It’s like anything else, when you run out of ideas, it’s better to leave it for awhile” (Iyaituk in Myers [Mitchell] 1988:69).

While Iyaituk’s earlier works reflect conventional Inuit iconography, his abstract work often records personal experiences: “When you look at my sculpture, you don’t understand all of it. That way, you have the freedom to dream. Everyone has their own opinions about art, so I just give titles to each piece and leave the rest for dreams” (Iyaituk in Inuit Art Quarterly 1996:5).

Marybelle Myers [Mitchell] says: “The hallmark of Mattiusi’s work is innovation. As he says, ‘As far as I can remember, I always liked doing things and making things for myself’” (Myers [Mitchell] 1988:73). Another feature of Iyaituk’s sculptures is, she writes, that they have an inside as well as an outside: “His faces of caribou antler or ivory are inserted into the stone, drawing the viewer inside the work. Indeed, much of the action . . . is hidden, the bulges in the stone giving only a hint of what is going on inside.” To art historian Maria von Fickenstein, “Iyaituk is the least narrative and illustrative in style of Nunavik artists. Although always rooted in realism, his work is highly stylized with only a few essential features indicating the subject matter” (von Finckenstein in Mitchell 1998:13).

In 1992, Iyaituk participated in a workshop organized by the Inuit Artists’ College at the Ottawa School of Art. He also attended a session at the Sculpture School in Rutland, Vermont. As well as being included in several public exhibitions and permanent collections, Iyaituk served as President of the Inuit Art Foundation in Ottawa, Canada from 1996–2012. He has also travelled extensively to give workshops and promote Inuit, including to Siberia, China, and the Philippines.

Iyaituk first carved images from the past using simple hand tools. Later, after attending a workshop organized by the Inuit Art Foundation, he began using power tools. He also revived the dormant practise of using inlay on stone carvings. He says his abstract works were born accidentally in 1979: “One day, I was doing a sculpture of a man, but I didn’t like it. So I just made shapes on one side. Since then, I have been doing sculptures using abstract forms” (Iyaituk in Inuit Art Quarterly 1996:5).

in the 1960s, when his sculpture, A Hunter’s First Catch, appeared on the cover of Things Made by Inuit, an exhibition organized by Marybelle Myers [Mitchell] for La Fédération des Cooperatives du Nouveau-Québec in 1978–1979.