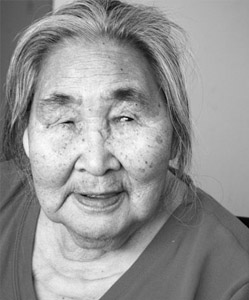 Today the elderly are still carving but it is hard for them because they get tired easily. The young people are going to school now; before the children were going to school they were making carvings, but since school began, there aren’t as many carvers.”

(Sara Nastapoka in an unpublished interview with the Inuit Art Foundation, 2009)

WHEN AND HOW SHE GOT STARTED

Nastapoka began carving when she was 15 years old, learning by observing the men in the community. Her first carvings were of trade objects: ashtrays, matchboxes, soapstone lamps, seals, and whales. She also made woven grass baskets and dolls. After the arrival of James Houston in 1949, Nastapoka began collaborating on sculpture with her husband, Abraham, who often received credit for her work.

Nastapoka and her husband worked on carvings together and, doubtlessly, influenced one another. Her son, Davidee, became an artist, likely as the result of watching his parents.

Nastapoka worked on her husband’s carvings, as well as her own. She could not spell her name and, at her request, Abraham often signed his name on her sculptures. In 1974, Nastapoka and her son set up a place to carve near the Inukjuak River. She used to go by dog team to quarry her own soapstone, which was located approximately 50 miles away in a place called Sungauyak, which means “beautiful stone” (Wight 2006:75). In an unpublished interview with Inuit Art Foundation staff in 2009, she said that she can no longer carve since her “hands do not work anymore.”