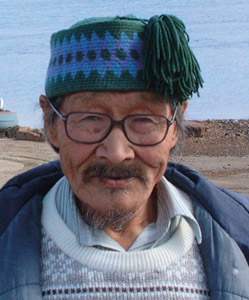 It’s not only about the legends, but also about the history. . . . I want the world to know about the special carvings that we can make, different things besides Inuit-shaped carvings, mixed with ivory and antlers and other things. . . . The future looks bright if young people continue to carve.”

(Thomassie Echalook in an unpublished interview with the Inuit Art Foundation, 2009)

At 25, Thomassie Echalook began carving as a way of earning money while living at an outpost camp. His family moved into Inukjuak in 1963. Although he began as a carver, he also made prints for several years, after attending a workshop in Puvirnituq in 1972 with his nephew, Noah Echalook. Upon their return, they transformed an abandoned portable classroom into a print studio, which was eventually moved to the co-op in 1975. Thomassie was the manager of the print studio until it closed in 1976.

Sculpture and some printmaking.

Marybelle Myers [Mitchell] says that the “fundamental theme” of Echalook’s prints was his “innate appreciation of the relation of parts to the whole” (Myers [Mitchell] 1975:4), and notes that this is particularly evident in A Face Out of Nature: “The cheeks are stones, each containing an animal caught in a trap. Stones are always used to weight a trap and Eskimo [sic] folklore has it that, when the animal dies, his spirit is trapped in the stone. Thomassie has shown us the unity of reality and thought in a way that is too profound for language.” She also observed that there is a “harmonious thread that pervades his carvings. Whether the subject is animal or human, he evokes a sense of inherent purpose in every object through a meticulous observance of precise detail and a fullness and solidity of form.”

About Echalook’s prints, Virginia J. Watt said: “The interest in Inuit prints lies more with the subject rather than the technical skills of the printer. Not so with Thomassie Echalook . . . [his prints] show remarkable discipline and control of line” (Watt 1976:5).

after his prints were published in the 1972 Arctic Quebec Print Collection catalogue.