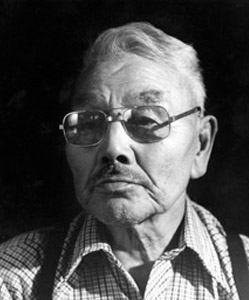 When he died in 1989, Thomassie Kudluk of Kangirsuk left behind a legacy of small, eccentric works that exist in a category of their own. Described as humorous, sometimes ribald, they are, in fact, testament to a man engaged in a serious commentary on Inuit life in the mid-20th century. For Kudluk, artmaking was an extension of his storytelling role in the community.”

Born between 1910 and 1911 on the Ungava Peninsula; moved to Kangirsuk (formerly Payne Bay) while still a child.

“His carvings were crudely cut from stone and barely modelled. The frequent use of shoe polish to paint the surfaces of the plain grey Kangirsuk stone made his work stark and decidedly unglamorous” (Routledge and Hessel 1990:13).

Marybelle Mitchell says: “Kudluk is more interested in the message than the medium” (Mitchell 1999:53). She says that this accounts for the fact that “there was a lot of writing to go with [his] drawings . . . a documentary quality to his work — telling about the old way of life.” Art historian Ingo Hessel writes: “His eccentric, earthy, often self-deprecating humour, apparent not only in his choice of themes, but, also in his carving style and lengthy titles or inscriptions, often poked fun at human foibles” (Hessel 1998:86). In the mid-1970s, Kudluk began “producing humorously sexual carvings, depicting men and women copulating, exposing body parts, and partaking in other erotic activities” wrote art historian and curator Norman Vorano (Vorano 2008:141). He notes that the short titles or captions that Kudluk included with these works “sometimes evoked ribald double-entendres,” such as the caption for Man Looking Through Telescope (1976): “A man looking through a telescope for a wife, but he is getting cold.” Commenting on this caption, art critic Dorothy Speak, asked: “Is the man is getting ‘frigid’ because of the temperature or because he cannot see a woman?” (Speak 1988:469). Vorano notes that these depictions or suggestions of eroticism were uncommon and considered taboo, consigning Kudluk’s “cheeky depictions of sexuality” to the realm of “eccentric” and “odd,” labels that were used in titles of exhibitions of these, and other erotic works, shown in the mid-to-late 1970s (Vorano 2008:143)